The original members of the FSQ first sat down together at Fitzwilliam College Cambridge, in October 1968 – as undergraduates during their inaugural term. Their first concert appearance took place in Churchill College the following March, ahead of their public debut at the Sheffield Arts Festival in June – making the Fitzwilliam now one of the longest established string quartets in the world, and possibly unique in having passed a half-century with an original player still on board! The present line-up combines founding member Alan George with a younger generation of performers: violinists Lucy Russell (herself celebrating 34 years in the group) and Andrew Roberts (son of the great pianist Bernard), along with Canadian cellist Heather Tuach.

International recognition came early for the FSQ, as the first group to record and perform all fifteen Shostakovich string quartets, drawing on the players’ personal connection with the composer: he travelled to York to hear their performance of his thirteenth quartet, and this musical friendship (the composer’s own word!) prospered through correspondence, and the presentation of his final two quartets – written in the years immediately following that visit. Sadly, a carefully planned trip to spend a week with him in Moscow was necessarily abandoned, following his death in August 1975. Benjamin Britten afterwards reported that his friend had told him the Fitzwilliam were his “preferred performers of my quartets”! Complete cycles were given in a number of major centres, including London, New York, and Montréal. A new recording of the last three quartets was specially released by Linn in October 2019, to celebrate “FSQ@50” year. Whilst their pre-eminence in the interpretation of Shostakovich has persisted, the authority gained has been put at the service of diverse other composers spanning five centuries, from the early 17th to the present day.

The quartet has appeared regularly across the UK, Europe, North America, the Middle and Far East, and Southern Africa, as well as making many award winning recordings for Decca, Linn, and Divine Art. A long-term ambition to record Beethoven and Schubert on gut strings – following the success of previous discs on historical instruments – was finally initiated during their 50th anniversary season, with recordings of Schubert’s last four quartets (the A minor and D minor already available, the C minor and G major just released). Thus does the Fitzwilliam remain one of the few prominent quartets to play on older set-ups, yet simultaneously bringing about the addition of over 60 new works to the repertoire – as can be heard on perhaps their most novel disc so far: a jazz-fusion collaboration with German saxophonist/composer Uwe Steinmetz and former Turtle Island Quartet violinist Mads Tolling.

After graduating from Cambridge in 1971 they immediately embarked on their first professional appointment, succeeding the celebrated Amadeus Quartet at the University of York. From there, the group built a niche for itself in concert venues around Yorkshire and the rest of the UK, at the same time joining a select company of aspiring quartets to have emerged under the guidance of Sidney Griller at the Royal Academy of Music. Having been Quartet-in-Residence at York for twelve years, at Warwick for three, and at Bucknell (Pennsylvania, USA) from 1978, their university work continues at Fitz, and now Clare Hall Cambridge and at St Andrews – the latter incorporating an annual quartet course, alongside their regular coaching weekend at Benslow Music (Hitchin). The quartet’s anniversary season itself included a concert back in Cambridge on 2nd March 2019, 50 years to the day after that debut performance!

The Hill Quartet are an innovative, multi-national chamber ensemble based in London. With strong roots in the classical world, they hold a deep interest in expanding the string quartet repertoire by curating, commissioning and performing cross-genre art forms and contemporary music.

Currently the Royal Academy of Music Chamber Fellows, the 2021/22 season has seen them appear at the Music@Malling, Rye Arts and North York Moors Chamber Music Festivals. Upcoming appearances include a chamber music residency at Snape Maltings as part of the Britten Pears Young Artists Programme and concerts at the Yeovil, Kings Lynn and West Cork Chamber Music Festivals. In September 2022 they will begin a three year Artist-in-Residence position at Wolfson College, Oxford University.

Previous season highlights include the North York Moors, Marylebone, Barnes and Petworth Chamber Music Festivals and recitals at St Martin-in-the-Fields, St James’s Piccadilly Church and Hatfield House. Their recent concert at the outdoor Bandstand Chamber Festival was praised in a five star review from The Arts Desk as a “fluid and refined interpretation” of Ravel’s quartet.

With their frequent collaborator, mezzo-soprano Lotte-Betts Dean, the Hill Quartet made their debut live appearance on BBC Radio 3 ‘In Tune’ program in 2020, performing new music by Connor D’Netto. The quartet’s latest commission ‘Winter Blues’ by jazz-bassist Misha Mullov-Abbado was recently premiered at Conway Hall, and their studio recording of this work is due for release by October House Records in 2022. Also featured on this album is Mullov-Abbado’s clarinet quintet ‘Three Road Songs’, recorded in collaboration with clarinettist Ben Mellefont.

They are mentored by John Myerscough, cellist of the Doric String Quartet, and have been awarded the Sir John Barbirolli, Dorothy & Marjorie White and Alexander Kelly prizes by the RAM in recognition of their chamber achievements.

For the 2020 and 2021 seasons, Greenwich Trio is embarking on a recording of the complete Brahms Trios. The sessions will take place at Menuhin Hall in London. 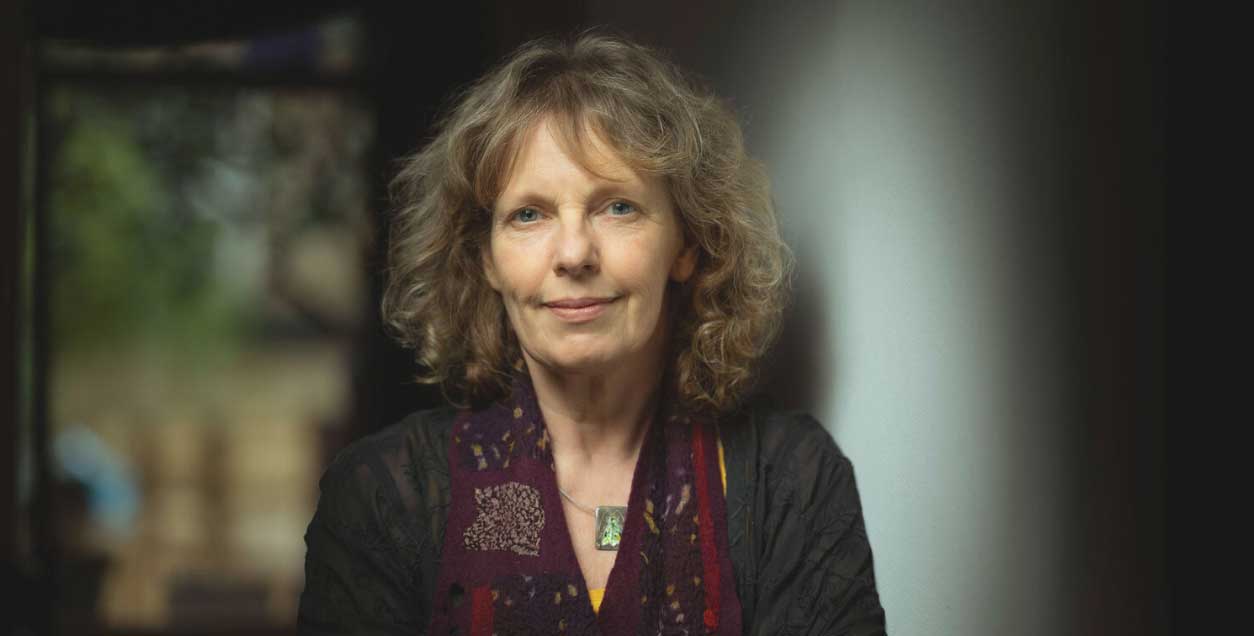 Liz Dilnot Johnson is a British composer who lives on the beautiful Malvern Hills, Herefordshire. Her music encompasses a wide range from exquisite miniatures to expansive and multi-dimensional works. As composer-in-residence with Ex Cathedra and with regular commissions from the Fitzwilliam String Quartet, her music is featured on BBC Radio 3 and Classic FM and performed all over the world.

Large-scale works include I Stand At The Door – a cantata for our time (2021) for chorus and orchestra – ‘Johnson’s love-song to the planet’ (first released as Gentle Flame Cantata 2019), also featured in the award-winning music video Can You Hear Me?, with texts by Greta Thunberg, Kurt Masur and David Hart.

When A Child Is A Witness – a requiem for refugees (2022) reinvents the traditional Requiem Mass to raise awareness of the plight of refugees, bringing communities and art forms together in a celebration of those who seek and offer refuge. Blurring the divide between performer and audience, this ambitious and multifaceted work is featured as part of the Coventry City of Culture festival in February 2022, performed by Ex Cathedra at Coventry Cathedral. Soloists include Lucy Russell (violin and Hardanger fiddle) Kadiale Kouyate (West African kora) and Gabriella Liandu (mezzo-soprano).

After a health crash that occurred in 2014 Liz has new regained full health and focuses her energy on composing full time. Her work often engages with difficult subjects, questioning and stimulating debate around wellbeing.

She lectured at the Royal Birmingham Conservatoire 1999 – 2019, teaching composition, designing and delivering modules on Music and Health, Community Engagement and, most recently, collaborative projects with Royal Birmingham Ballet.

Liz’s career began in school-teaching and in her mid-30s she took a ‘year out’ to study composition for the first time gaining a Masters with distinction at Birmingham Conservatoire, and was encouraged to continue to complete her PhD by tutor Philip Cashian.

String Quartet No.3 Intricate Web was selected by Sir Peter Maxwell Davies for the opening of Kings Place, London. Moon Incantations for children’s choir reached the final of the British Composer Awards. Is This It? a mini opera was performed at Covent Garden by the Opera Group. Other recent commissions include The Windhover – Ex Cathedra’s Dawn Chorus Commission 2020 and Blake Re-imagined written for virtual choir during the first Lockdown in 2020.

Lucy Russell is held in high international regard for her versatility as a violinist. Her work on both modern and period instruments as leader of the Fitzwilliam Quartet has taken her across the world and has encompassed a breadth of repertoire stretching from Purcell to the present day. She has premiered works for baroque violin by several composers, most recently John Woolrich (Scherzi) for the Buxton Festival. Her CD of Bach’s Obbligato Violin Sonatas with John Butt (Linn) has received overwhelmingly positive critiques and was nominated BBC Disc of the Week. With her exclusively ‘baroque’ or ‘classical’ hat on, she has lead several ensembles over the years: The King’s Consort, Classical Opera Company, Florilegium, Dunedin Consort (to name a few) but she has enjoyed the varied experiences of playing with such groups as OAE, ORR, EBS and AAM. She has continued to develop and refine her approach to stylistic performance on different violins, ranging from the music of Monteverdi to the present day and has recorded extensively for Linn records as well as for Channel Classics, Divine Art and Hyperion.

Lucy has taught and given masterclasses all over the world – in the Czech Republic, Russia, USA and South Africa; closer to home, she has worked at the Royal Academy of Music with the Modern Instrument Baroque Orchestra, at Royal Holloway College, Fitzwilliam College Cambridge, Pro Corda, Dartington International Summer School, Benslow Music, and for the Fitzwilliam’s own chamber music course, Strings in Spring, in St Andrews (Scotland). She recently performed Mozart and Brahms on period instruments at Cornell University, USA, in the Westfield Fortepiano Festival, organised by Malcolm Bilson. A new recording on gut of Bruckner’s Quintet and Quartet with FSQ is currently being released, and plans are afoot to record the Beethoven late quartets on gut as well.

A member of the much-loved duo Belshazzar’s Feast, Paul has 20 years of touring in the UK, appearances on television and radio gained them many plaudits including a nomination for Best Duo at the BBC Folk Awards in 2010. He is regarded as one of the top accordionists in the country because of his unique, refreshing, and at times ‘classical’ approach to playing. He is an experienced workshop leader See Workshops.

Paul also has a keen interest and knowledge of 17th & 18th-century music which has resulted in appearances at festivals in the UK, Europe, and the USA See Publications.
His love of fusion music originates from his days in the renowned Celtic jazzers, Hoover the Dog. Pagoda is the next exciting chapter in his musical journey providing a vehicle for his own compositions with more than a helping hand from the wonderful jazz clarinetist, Karen Wimhurst. Their debut album ‘Clarion’ received 5 Star reviews from Songlines and fRoots

Sophie enjoys a varied musical life spanning chamber music partnerships, orchestral playing, teaching and cross genre collaborations with world and folk artists, for which she creates arrangements. She has been violist in the Orford String Quartet of Canada and Principal Violist in the Scottish Chamber Orchestra.

Currently a Professor of Viola and Chamber music at Royal Conservatoire Scotland, Sophie enjoys performing the classical repertoire as a member of London Mozart Players and Orchestre Romantique et Revolutionnaire.

In 2018 she founded string trio Trio Mythos with violinist Lucy Russell and cellist Ruth Phillips to explore the connections between folk and Baroque music. In 2019 she created string arrangements for songs by singer song-writers Brothers Gillespie and Provencal polyphonic vocal trio Tant Que Li Siam which were performed alongside re-workings of traditional folk tunes and Baroque chamber works in France and UK and recorded for CD in 2019 under the name “ Hirondelle.”

Tickets also available on the door, subject to availability.